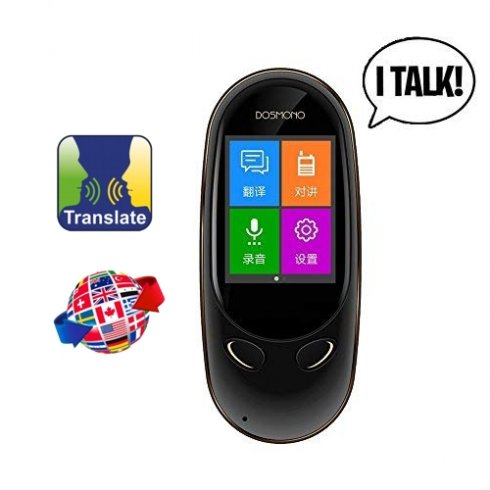 All products we are testing
Product description Discussion … Rating 3

Two-way voice translator DOSMONO Mini S601 with WiFi/3G and 2,0" touchscreen supports 72 languages. It is an innovative, multi-functional, electronic two-way translator that includes, except other things, "press to talk" function (press and talk based on the radio walkie-talkie), WiFi connectivity, 3G network and many other features beyond your imagination. The full color 2,0" touchscreen provides convenient control of individual device functions.

The electronic translator is suitable for everyday use whether on holiday or when working abroad thanks to its small, light and prestigious design. With support of 72 languages your travel limits will be unlimited, and you will no longer be limited with worries to travel to the foreign countries due to the language barrier. The translation of sentences and texts (speech) will be a matter of course for you. No additional charges for updates or other hidden charges. No need to register personal data or install an app into the phone.

The function Smart Note lets you record voice comments that can then be exported to a .txt file. Travel for your dreams and know new places and leave the foreign communication to a revolutionary translator. Integrated battery of translator with the size of 1450 mAh is charged in about 2 hours and then provide a continuous working hours to 6-8 hours, in standby time is up to 72 hours (3 days) Function of walkie-talkie between translators

I would like to know if it translates 8 languages offline as stated, does it mean that if I set the translation from Slovenian to English and vice versa it will translate for me?
thank you

Hello
Yes, exactly like that in both ways of translation.

Hello,
I am interested in whether the translator, when translating from a given language into Bulgarian, translates it with audio or only text?
Thanks in advance!

Hello
Both audio and text.

Good day
Is the translator able to understand and translate speech from video? Isn't there a catch compared to human speech?
Thank you
Jiří Spáčil

Good day
Just the fact that you will have to pause the video so that the translator can translate the messages and then play it again. It is necessary to ensure good pronunciation and volume of audio output from the video.

is there also Slovenian in the translation?

Translated from: sl
Ask in discussion