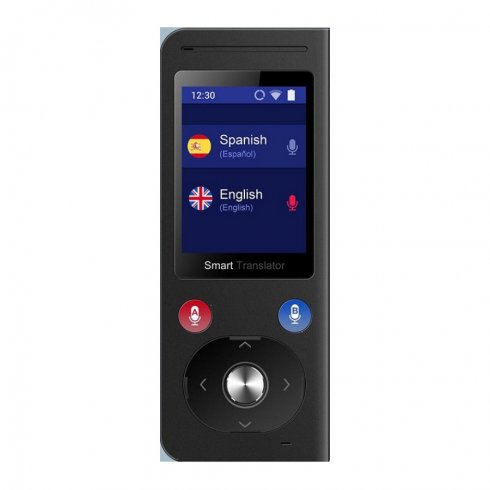 Smart speech translator WiFi - online translation into your pocket for two-way voice translations into 45 languages. Online handy translator as a digital interpreter for your travels. Smart translator is designed to fit perfectly with each user and its control is also adapted for maximum user comfort.

Remove all the language barriers that can occur during your holiday, business trip or short trip, with an online translator you will understand everything and everybody. The translation is provided and handled by the latest intelligent technology, that is able to learn by itself. As a result, the innovative translator has no problem with translating of approximately 45 languages up to 0,3 second. The online translator also attracts attention with its modern and minimalist design. The translation information is displayed on the 2-inch touch screen.

Smart translator is designed to fit perfectly with each user and its control is also adapted for maximum user comfort.​ Below the display, there are two buttons - button on the left for a mother tongue and button on the right for a foreign language. When you press the native language button (set by you), the microphone icon appears on the screen and starts recording the spoken word, and after releasing the button, the device starts translating. This also works for a foreign language button. You can use the joystick to navigate through the menu, the button in the middle serves as a button for confirming or playing the translation again. The spoken translation is very natural and does not look too artificial. The translator tries to communicate as a real person, what means it  mimics nonverbal sounds like lips movements, or various breaks between the breaths. You do not have to worry that there is a word that the translator does not understand or translate because it does not have it in the database. Its databases work in the online environment and through WiFi they are constantly updated. The translator will surely surprise you with its stamina - 5 hours in active use or 72 hours in stand-by mode. However, it works the best with the literal expressions. Feel like at home anywhere in the world and communicate without problems with a compact, intelligent translator.

Detailed description of the translator functions and inputs